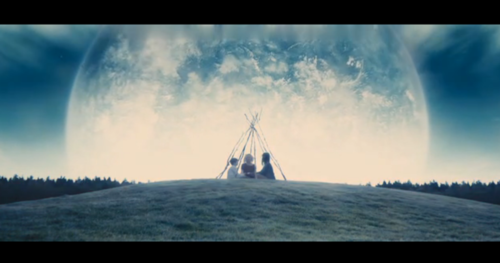 This is a new feature on this blog that reviews Netflix Instant Watch movies and sometimes TV shows.

Every so often a movie that is hilarious, uplifting, and lively will appear on Netflix, sometimes surprisingly meaningful, more often than not blatantly shallow.

Melancholia is not one of those films. To watch this film requires more work on your part: you must be willing to be patient, understanding, and intellectual, seeking truths in metaphors that may or may not exist, puzzling over who would make such a hazy, yet beautiful film.

Only recently did Netflix release the movie, which premiered in May of 2011 at the Cannes Film Festival, and as it won many awards there, and as some journalists tout it as one of the best films of 2011, I had to see it.

It wasn’t your average end-of-the-world movie. The film splits time between sisters Claire (Charlotte Gainsbourg) and Justine (Kirsten Dunst). The Netflix description calls their relationship “disintegrating,” but I would disagree. They rely on each other, these sisters, and as doom descends upon them in the shape of a watery planet, they change for each other.

Kirsten Dunst of the Spiderman movies stars as a beautiful bride – at least at first. Justine and her groom arrive late to the reception – their limousine driver had trouble navigating through the winding road leading to Claire’s estate – and, instead of waltzing in to the party, reassuring the guests, Justine stops at the stables to greet her horse, Abraham. This is the viewer’s first cue that something is wrong.

From there, the reception is a slow, painful disaster. The best man, Justine’s boss, presses her for a tagline on her wedding night. The mother of the bride, wearing a sweatshirt with a peace sign on it, detests weddings, and makes the fact clear to everyone listening, the father ignoring her – ignoring everyone – to giggle with the women at his side, women considerably younger than he.

Justine finally ruins the wedding by sleeping with her boss’s messenger boy. Her groom leaves with his parents. “This could have been different, you know,” he says.

An hour through and still no mention of the monstrous planet hiding behind the sun.

The focus switches to Claire, who takes care of her now comatose sister (how did that happen so quickly?). Her husband (finally!) informs her about the hidden planet that scientists predict will just barely pass the Earth by. He says it is a “privilege” to witness this moment in history, while her young son looks for diagrams online. As the planet gets closer and closer, she gets more and more worried. And then it passes. It recedes. It’s gone. She’s made it!

No. The next day, the planet looms larger than ever. Director Lars Von Trier shows how different people react under stress; Claire, normally composed, considers a “nice” way to kill herself; her husband, the know-it-all, commits suicide in the stables; and Justine, who couldn’t get into a bath the week before, is most collected, gently guiding her nephew and sister to a cave of sticks where they close their eyes, and wait.

The movie isn’t as depressing as it is… magical. The beauty in this watery planet that rises opposite from the moon hovers in the night air; Justine, naked, lies on a boulder by a stream, taking in the blue light; the estate itself triumphantly overshadows the stellar orbs; Wagner’s prelude for “Tristan und Isolde” plays softly, then loudly. It’s sheer wonder, and if you’re okay with a depressing, unadventurous, and frankly boring apocalyptic story, then you should sit this one out. Plus, there’s some deeper symbols about depression, which hides dormant before shadowing someone’s life, and Melancholia, a planet which did the exact same to the Earth.

This is a blog about entertainment. About love. About equality. About the things we hold dear. About travel. This is a blog I am proud to call my own. I'm Actually Allie. Let me show you a few things.